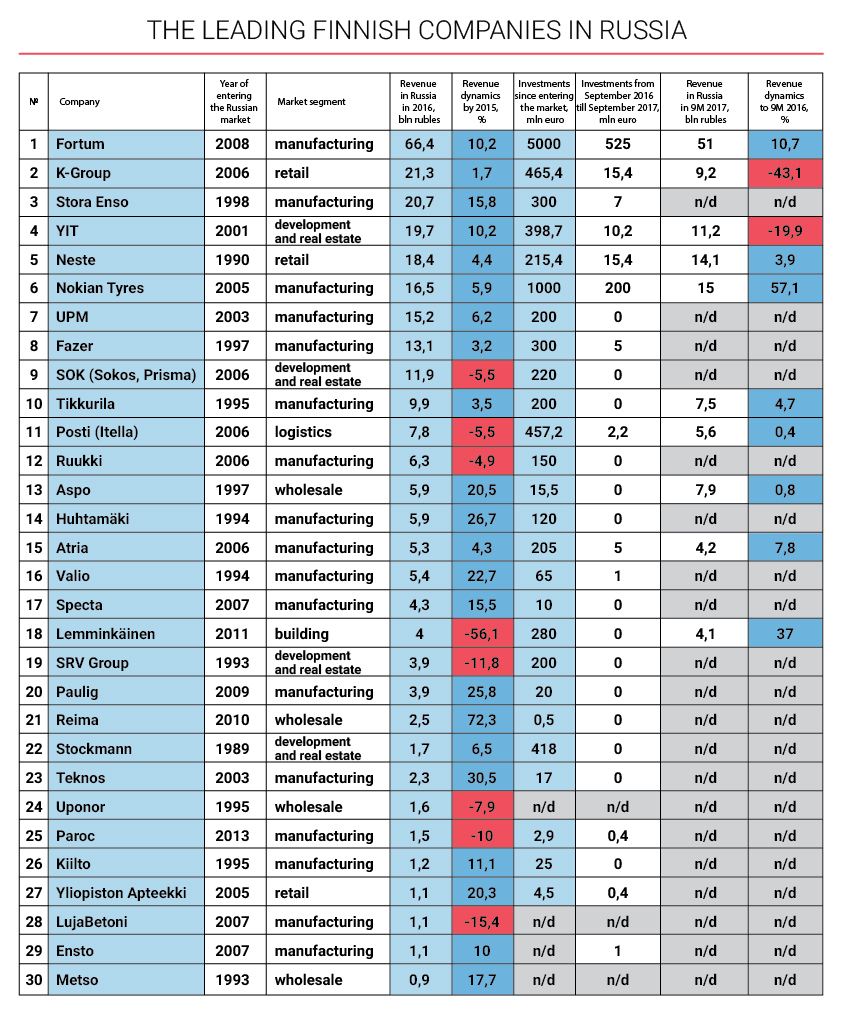 Key points of the research:
1. Finnish businesses in Russia have overcome economic crisis. The year 2016 showed that 22 out of 30 biggest companies have gained positive momentum.

2. Finnish companies are recovering after the crisis faster than Russian economy. In 2016 30 biggest players' revenue went up 5.2 % reaching 281 billion rubles. Russian GDP, in contrast, went down 0.2 % during the same period. The year 2017 may witness a slowdown in the growth rate as 10 companies, revealing interim results, improved their volume rates by 2.4 %.

3. Manufacturing sector has the most confident position in Russia. This sector's share in the Top-30 companies' volume according to the results of the year 2016 amounted to 64 % (180 billion rubles). Revenue growth for the same sector by the year 2015 was 9%. 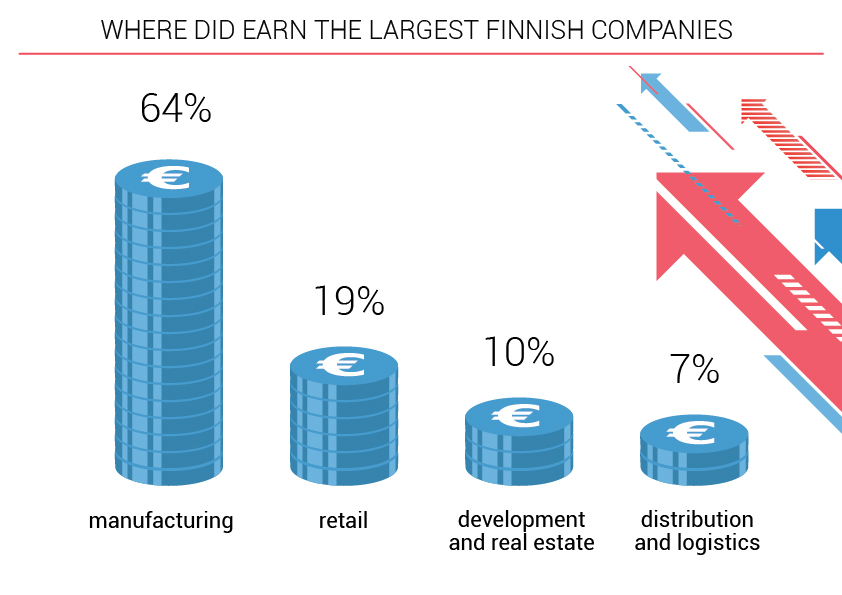 4. Real estate and development is the only area to show decline in 2016 in Top-30 (-11% down to 29.3 billion rubles). As a result of Lemminkäinen's decision to leave construction business and SRV's now charging tenants with rubles instead of euro.

5. Finnish retail business has not recovered from the food import ban. In 2016 combined revenues of Top-30 participants went up 1.2% (by 53 billion rubles). With 5.4 % inflation such growth is more likely to be seen as decline.

6. Manufacturing sector continues to improve it positions in Russia thus squeezing other sectors out. According to interim reports and announced investments, players' growth rates may increase by 1.5 times compared with the year 2016. 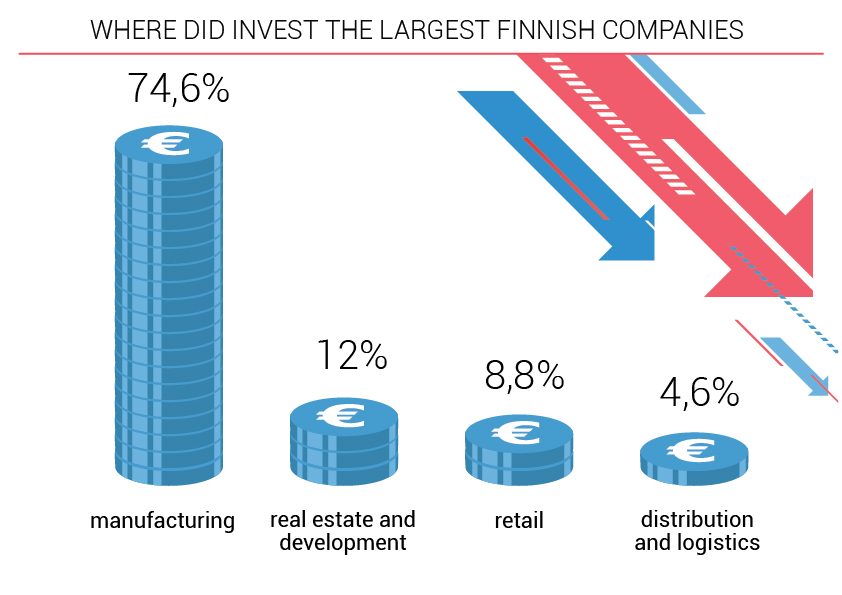 7. Finnish retailers, as well as real estate owners and developers will lose even more ground following the results of 2017. Reasons include Kesko's decrease in sales as a result of K-Ruoka leaving the market, YIT's drop in sales, low rate of development of other players. Results of 2016 show that retail business is responsible for 19% of the combined turnover of the Top-30 companies, while real estate is responsible for 10%.

8. Distribution and logistics fields were growing faster than manufacturers (+9.4%) in 2016, while in 2017 they want to adjust their growth rates and improve their profit.

9. Russia is still attractive for the Finnish investors due to its size of the market. During last year (September 2016 – September 2017) Top-30 companies invested 788 million euro into their Russian businesses. Compared with September, 2016 volume of investments went up 8%.

10. Investment allocation is highly incoherent. Only a few can afford big projects. 63% of all TOP-30 investments comes solely from five companies. 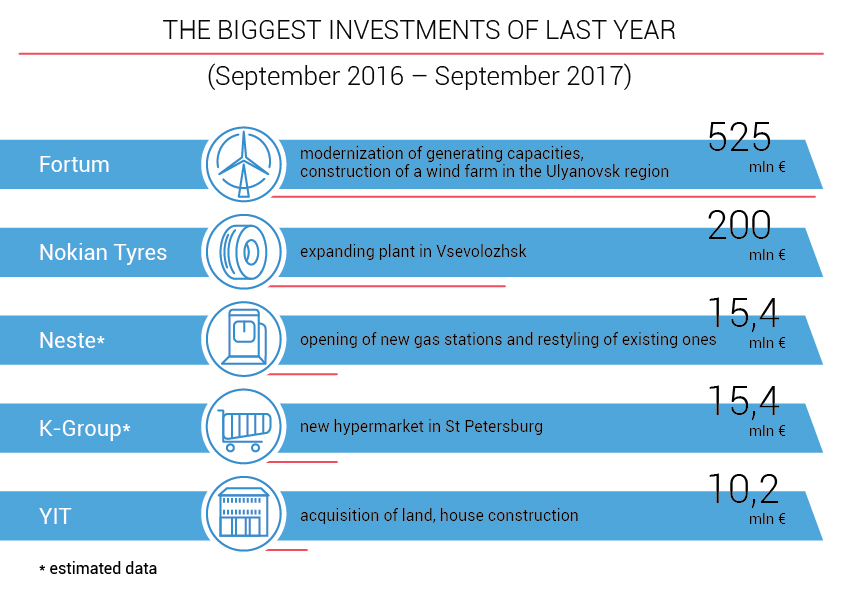 11. Manufacturing attracts investment, other business areas lose it. In the total investment volume made by Finnish companies from the moment they entered Russian market, the manufacturing sector's share is 74.6%. In the last year's investment volume – 94%. Retailers' share went down from 8.8% to 4%, real estate owners and retailers from 12% – to 1.3%.

12. Companies from Top-30 have branches in all of the Russia's regions, except for the North Caucasian Federal District. Manufacturing, retails, real estate and distribution centers are mainly located in the Northwestern (24 out of 30 companies) and the Central Federal Districts (20 companies out of 30). 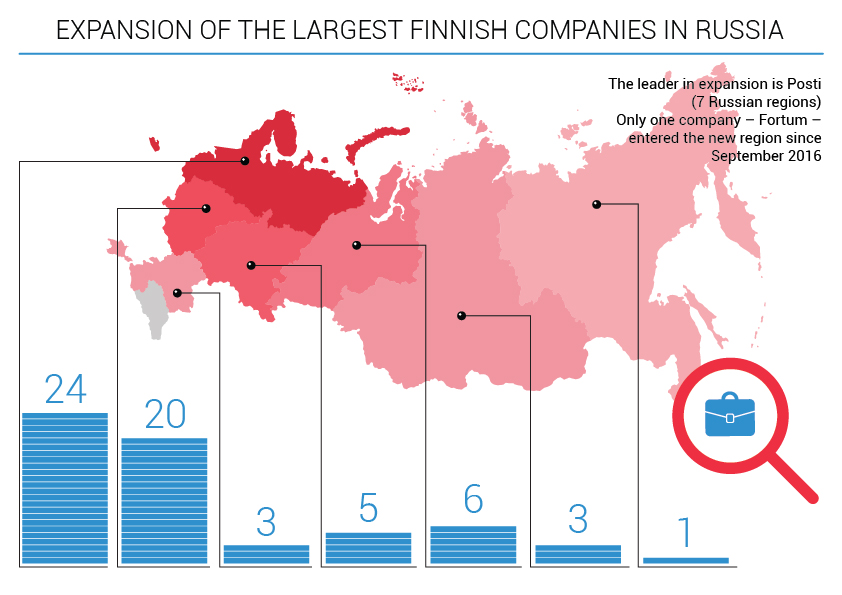 13. In the last year (September, 2016 – September, 2017) only one company has started to explore the new region. Fortum launched construction of the wind farm in the Ulyanovsk Region, Volga Federal District.


14. As of November, 2017 three major investment projects by biggest Finnish companies in Russia are announced: Fortum (wind farm construction partnering with Rusnano – around 215 million euro), Tikkurila (paint factory for 30 – 35 million euro), Fazer (frozen bakery factory, 220 million euro). However, it can take time to bring the latter one to life.
About the research
The research "The leading Finnish companies in Russia" was conducted by online newspapers Fontanka.ru and Fontanka.fi in September – October 2017. It ranks Finnish companies with top revenues represented in Russia. Information sources were annual and quarterly reports, data bases of SPARK-Interfax, as well as information provided by the companies themselves and expert business forecasts. In cases where revenue data from RAS (Russian Accounting Standards) for legal entities reports and data from information about Russian branches from finance statements of the parent companies differed, the latter was used. The exchange rate used for revenue approximation was the average rate of the Central Bank for the year 2016 (74.06 rubles per 1 euro) and for the nine months of the year 2017 (64.9 rubles per 1 euro).